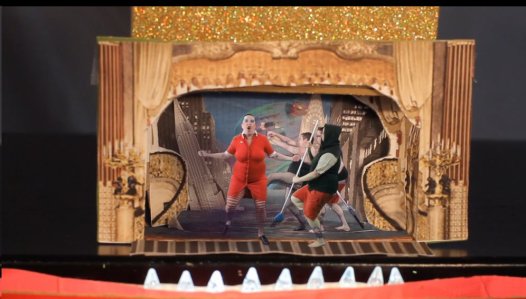 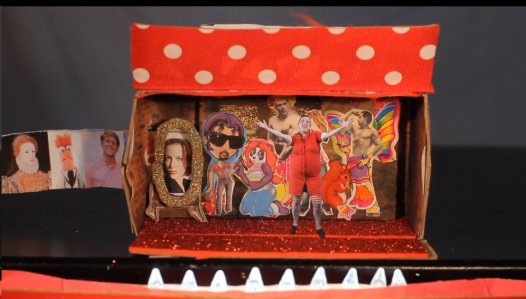 Annie is stuck in the rotten gender-binary girls’ orphanage system, dreaming of a place where they could thrive. “Tomorrow, tomorrow, I’m changing tomorrow… I’m not just a girl or gay!” sings Annie. This song-cycle performance is based on a play written by Dr. Kate Sorensen and Killer Sideburns and performed at Idapalooza Fruit Jam in 2004. The 2011 video features four toy theater stages created by Dr. Kate Sorensen, green-screen video magic by Niknaz Tavakolian, and Killer Sideburns as a miniature broadway star.

I played Dorothy Gayle in a Coney Island scene from surrender dorothy, or Something With a Little Poison in It. Screened at MIX NYC Experimental Queer Film Fest (2009)

In 2006, I was included in the documentary film “Young, Jewish & Left” by Irit Reinheimer & Michael Konnie Chameides. A celebration of diversity, Young Jewish and Left weaves queer culture, Jewish Arab history, secular Yiddishkeit, anti-racist analysis, and religious/spiritual traditions into a multi-layered tapestry of Leftist politics.  Personal experiences from many of today’s leading Jewish activists reframe the possibilities of Jewish identity. It presents a fresh and constructive take on race, spirituality, Zionism, queerness, resistance, justice, and liberation.

“As E. Nepon, a Philadelphia activist and organizer of the 2003 queer anti-imperialist Purim cabaret Suck My Treyf Gender, explains, ‘We’re doing this work not in spite of, but because of being Jewish. Our Jewish culture is about resistance to tyranny, and I want to celebrate that, beyond calling out my people as oppressors. I want to be able to call out the super-powerful and beautiful things about the culture that I come from.'”