Purim 2017: No One Mourns The Wicked/The Wizard of Shushan

▼ WHAT IS THIS EVENT?

The Jewish holiday of Purim celebrates the events of the biblical Scroll (Book) of Esther (aka “the whole megillah”) in which Jews are saved from genocidal tyranny by Esther’s bravery to out herself as a Jew (+ there is much more to this story). Purim occurs in the Jewish month of Adar, when we are commanded to 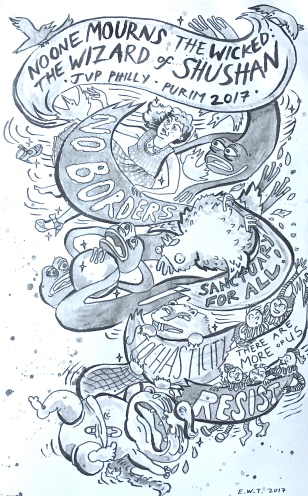 increase JOY and welcome a season of miracles!

A Purim-shpil (“play” in Yiddish) is a centuries-old annual ritual performance of topsy-turvy, upside-down, carnivalesque weirdness – it’s in the Talmud! A time to re-read and re-interpret the Book of Esther and the daily news while wearing costumes, gayly eating triangular yonic cookies, and reveling in our surreal disorientation.

▼ WHAT IS THIS SHOW ABOUT?
This year’s shpil (play) is a re-mix of The Wizard of Oz, the Megillah, characters from Narnia, modern political questions, and more! Frogs, beavers, migratory and domesticated birds populate the landscape. Esther and her rooster traveling companion Toto are on the move. A giant baby spews tyrannical noise pollution. May this be the year that the Witch Against White Supremacy conquers the Wicked Snitch!